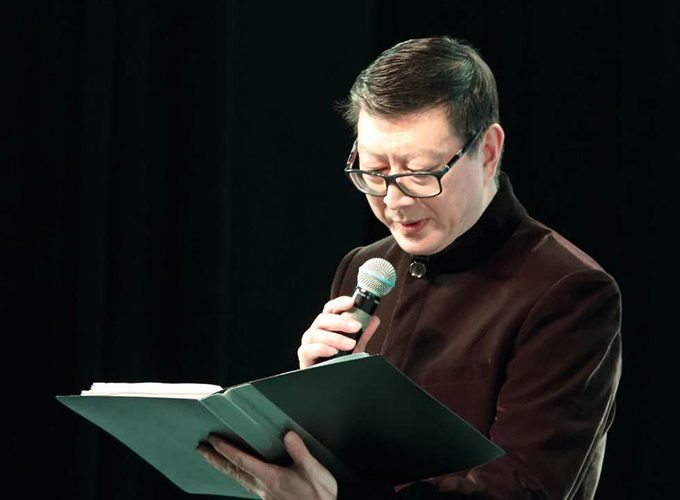 World Reading Day is coming up again this April and in this regard bookstores, as carriers, have made great contributions to promoting reading nationwide. Even though today’s bookstore industry is rather stagnant, there still exist a few decent physical bookstores in Ningbo, one of which is the Red Dowry (Shi Li Hong Zhuang) Bookstore, located in Ningbo Cultural Plaza. Ask any Ningbo ren about the bookstore and its owner Hao Li (aka Brother Hao) and they’ll most certainly know what you’re talking about.

It was last spring that I first met Brother Hao when my friend and I participated in an activity held in the Cultural Plaza. During the activity, the idea of visiting Red Dowry Bookstore suddenly hit us. Unfortunately, we failed to find the location of the bookstore since we had never been to it before, so we gave them a call. We ultimately got the information we needed to find the place. When we arrived we were welcomed by Brother Hao in the hall and with a smile he said he had sent a salesclerk out to find us, but it seemed that we had missed each other. We felt flattered by such a thoughtful gesture but also ashamed for causing the bookstore trouble. Brother Hao thought it didn’t matter and said with great sincerity, “You are the ones we were waiting for.” I guess that is a kind of self-cultivation and bearing possessed by a scholar.

At that time the bookstore had just been opened, so there were not many visitors inside. Still, three to five people were standing in front of the bookshelves just browsing or sitting and reading books while drinking tea, cultivating a warm and homelike atmosphere. The majority of books in the store were new and unopened. Brother Hao told us we could open any of them to read and it didn’t matter whether we ended up buying it or not. Brother Hao is very generous and even allowed a reader to borrow and take a book home after she had already read half of it.

Before leaving, I bought a book named Reaching the Brink of Life written by well-known Chinese writer and translator Jiang Yang when she was 96-years-old. At that time I got the book, I didn’t expect to hear the news of her death a month later. Suddenly, various social media were flooded with information about her and her works. I didn’t come along for the ride, but thinking of my encounter with this book that night felt like some sort of fate.

From then on, I began to listen to Brother Hao’s recordings from when he was an announcer reading books for readers with his mellow voice on the official WeChat account Red Dowry Bookstore Channel. Later on I also started watching a local financial talk show called San Ge Yan Yi which Brother Hao was involved in creating, and I learned a lot from it. It seems that he has done these kinds of things with an enterprising spirit, but there is no doubt that his efforts are supported by rich knowledge and experience. Since following his work I sought another opportunity to sit down and have a talk with him, asking him to share his story with me. It was only recently that I was able to get the opportunity, close to World Reading Day. After all, Brother Hao is definitely the right person to ask about reading.

Ningbo Focus: As a 30-year media veteran who once worked in a broadcasting station, TV station and newspaper office, do you think print media still has relevance in the era of new media?

Brother Hao: The media is not superior to what it used to be, but they still mustn’t become vulgar and cater to basic wants and the desire for entertainment. The proliferation of all kinds of information channels won’t lead to the recession in print media, but rather provide a golden opportunity for it to flourish. Unlike new media, print media doesn’t have the advantage of speed, but that means there’s adequate time for print media professionals to write more elaborate, in-depth and reliable stories which don’t just serve their current readers, but evaluate life, social changes, ideologies, ethics and future trends, making them necessary as conduits and critics of information. What’s more, people’s lifestyles will be more diversified in the future, and print media, as a symbol of an elegant, classic and high-quality lifestyle, will have a promising future.

NF: E-books have replaced physical books thanks to a demand for a more fast-paced lifestyle. In light of this, do you think the existence of physical books is still valuable?

BH: I think it’s fair to say that both psychical books and electronic books have their own virtues and faults. I confess that I also read e-books and listen to audio books. In my view, reading physical books is more of a lifestyle. Studies have shown that compared with information acquired from screens, information acquired from physical books leaves much more of a lasting impression. But this is just superficial data, as physical books not only provide you with reading contents, but also synchronously contribute to an experience, leaving physical evidence to show your attitude and hobbies over a certain period of time. Additionally, for various reasons like environmental protection, publishing physical books, printed magazines or newspapers will become a rather extravagant action, so the exquisite books you collect now probably will acquire more value in the future.

NF: With more and more people turning to digital books and reading, is it inevitable that problems like the fragmentation of information and shallow reading will become more prominent?

BH: Now the phrase “fragmented reading” is a neutral term, but I think in time it will become an obstacle. It seems to be very convenient since there are overly abundant channels for people to acquire a wide range of information, but actually the interference brought by drivel mixing with legitimate information and news is becoming more of a burden. Modern people should learn to manage their own information channels, retaining a few high-quality and effective sources while clearing up those that are insignificant.

NF: In this age of online shopping and with the convenience of public libraries, community libraries, mobile libraries and electronic libraries, do you think its still necessary for physical bookstores to exist? How can they keep up with the times?

BH: A physical bookstore is like a field or a container, it can be combined more closely with various kinds of economic models and people’s life demands in the future. The owners of physical bookstores also should improve their own professional competences to better serve customers, not just putting books on bookshelves. For example, when I am reading books and recommending a list of books on our official WeChat account, I need to incite readers to be willing to listen to the books I read and believe that the books I recommend deserve to be read. Nowadays, book lending in public libraries has definitely become more convenient, but whether you go to the library or not is a matter of individual choice. Forming a trend of nationwide reading needs a group of people’s efforts, and only having hardware is not enough. That is what we, as the operators of physical bookstores, are doing. 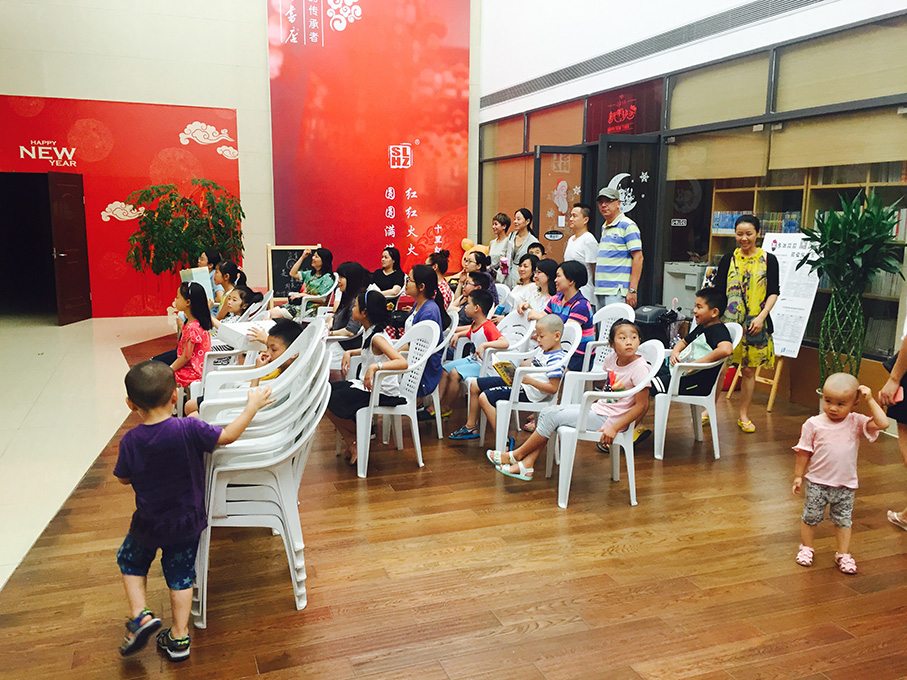 NF: We’ve been focusing a lot on how physical bookstores have suffered in recent years. How did you muster the courage to open a bookstore while so many people are anxious about investing in such ventures due to the state of the industry?

BH: There are a handful of people who are fond of reading that hold a dream of opening a bookstore when they become older. There was a mania of bankruptcy in physical bookstores around 2010, which made me feel pity and think our dream was to be destroyed by such a phenomenon. However, thanks to my acute insight as a media professional, I believed that physical bookstores had not come to a dead end. On the contrary, I saw that they could survive in various ways. So I started to go to places like Taiwan and Shanghai to investigate physical bookstores and then returned to Ningbo to build Red Dowry based on the aesthetic tastes and selection I found in major bookstores around Asia. I believe the operation of physical bookstores should be market-oriented, but should not be so at the cost of scholarliness. As long as they are resilient and have ways on bringing customers in, there are many ways for physical bookstores to survive, because every person is willing to pay for these wonderful things.

NF: How were things for the bookstore in 2016? Did anything interesting or significant occur that helped the operation along?

BH: Last year the bookstore ran well. The Cultural Plaza provided great support for us. Besides, through promotion on our official WeChat account, the bookstore has gained more attention around Ningbo. Institutions like the voluntary service center 81890 and the Bank of Ningbo always turn to us to provide professional services for their reading sessions; each Saturday’s 12-people salon has expanded to fifteen or sixteen people since there are so many wanting to sign up, and now we are preparing to divide groups. Furthermore, our bookstore is always thought of as a travel destination when people such as medical experts from Huangshan ?and the producer of the film A Chinese Odyssey came to Ningbo on business; and many readers who live in other cities insist on buying our books and ask us to send to them via express delivery after watching our recommended booklists. Not long ago, the studio of Xin Ye, who is the vice-chairman of the China Writers Association, opened in Ningbo. It’s not only a bookstore, but also a teahouse and coffee shop. Lastly, we chose the name “Red Dowry” as it is an auspicious title, harkening to ancient Chinese culture and inspiring people to come have a look. 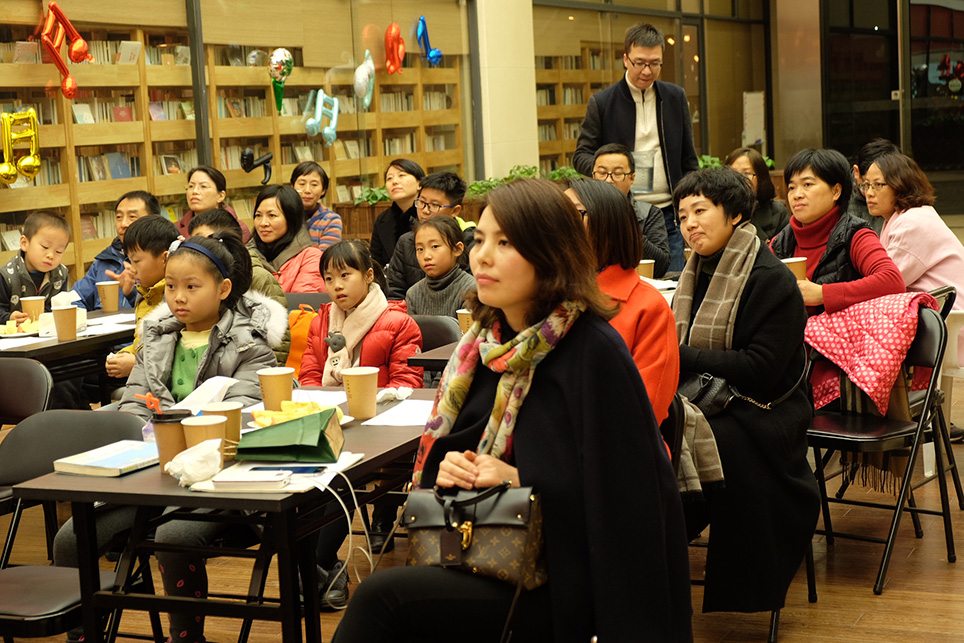