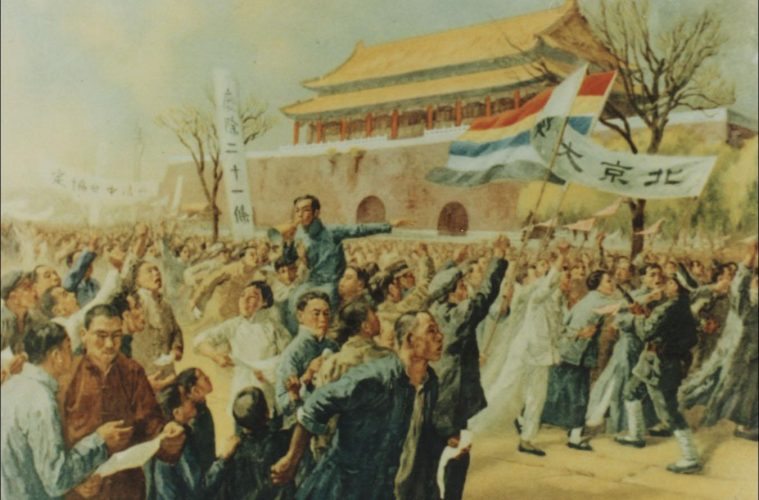 Legacy of the May 4th Movement | 五四运动的历史遗产

“The May 4th Movement”, the name for the protests in Beijing against the signing of the Treaty of Versailles on May 4th, 1919 and its encompassing of the New Culture Movement, is often citied as one of the most influential?cultural and political movements of modern China. The movement, which challenged traditional Chinese Confucianism and values as detrimental to progress, opened the doors to diverse social and political ideologies to?take root, including anarchism and, more significantly, communism. Even though the movement was criticized and eventually squashed by the Nationalist Party’s New Life Movement, its roots had taken hold and contributed to the China we know today.

Following the Xinhai Revolution of 1911 and the fall of the Qing Dynasty, the Republic of China was formally established under the presidency of Yuan Shikai in 1912. After taking office however, Yuan proclaimed?himself Emperor of China and established his seat of power in Beijing. This sparked off a power struggle across China between various warlords who had taken control of large swaths of China and continually tried to encroach on their rivals’ territory. Furthermore, the ruling government under Yuan, the Beiyang, was primarily concerned?with domestic affairs, which allowed foreign powers to maintain their spheres of influence across the country. This set off a storm of criticism throughout China, primarily focused on traditional culture and the backward ideas?of Confucianism, which were blamed for the sorry state of the nation’s affairs.

Criticism of China’s handling of external affairs and the country’s place in the world took hold as early as 1915 thanks to the New Culture Movement, as students and intellectuals across the country turned to new magazines like New Youth, published by future Chinese Communist Party (CCP) founder Chen Duxiu, and began to formulate a push towards social and political reform including the abandonment of Confucianism and other traditional practices. This push came to fruition following World War I. China had entered the war on the side of the Allies in 1917 under the promise that Shandong, then controlled by Germany, would be returned to China at the end of the war. When China attended the Versailles Peace Conference in 1919 though, their demands were ignored and the Western powers decided to transfer control of Shandong to Japan.

On the morning of May 4th, 1919, over 3,000 students from 13 universities around Beijing marched on Tian’anmen, demanding the resignation of pro-Japanese officials, for the government to refrain from signing the Treaty of Versailles, and for a boycott of Japanese goods. Protests and boycotts spread throughout the country, which culminated with a general strike by businesses in Shanghai on June 5th, which nearly led to the collapse?of the Chinese economy. The government eventually gave in to the movement’s demands, dismissing pro-Japanese officials, reorganizing the cabinet, and refraining from signing the treaty.

Even though Japan did gain control of the Shandong Peninsula, the fact that the government didn’t sign the Treaty of Versailles was seen as a symbolic victory for the May 4th Movement, which led to a surge in its progress with the publication of over 400 periodicals focused on Western ideas, thought, reform, and a spread of the ideas of the New Culture Movement throughout the country. 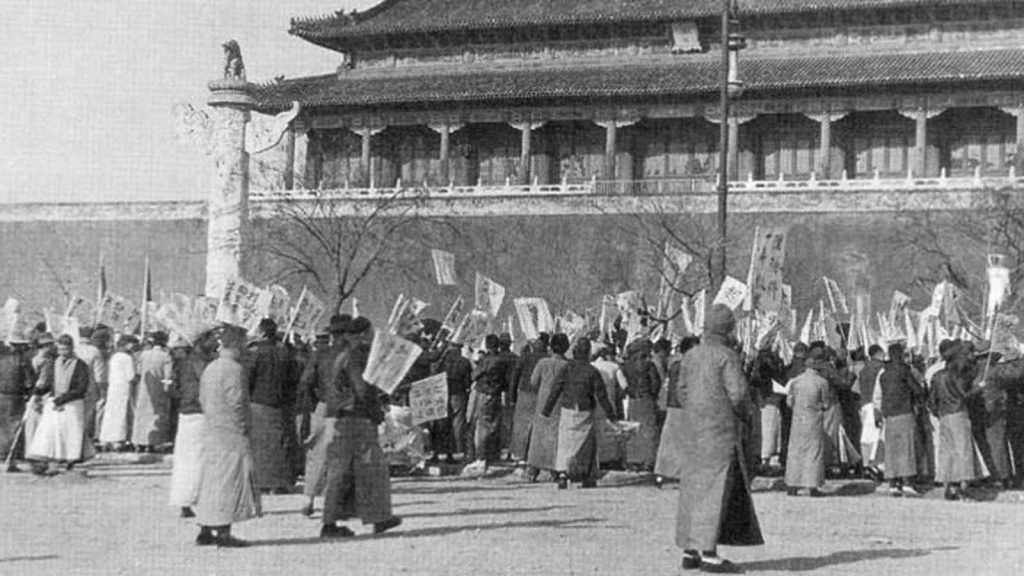 The spread of the May 4th Movement, which had grown to encompass the New Culture Movement, led to what has been referred to by scholars as a “Chinese Renaissance” during which there was an increase in scientific experimentation and studies as well as a spread of Western philosophical, social, and political thought. There were also an evolution in Chinese writing, which began to use more vernacular language – pioneered by Chinese writer Lu Xun – a shunning of patriarchal family structures in favor of more freedom and women’s rights, and even changes in journalism, which was changed to meet international standards.

Most significant in these changes was the spread of diverse political ideologies, including democracy, republicanism, anarchism, and socialism. The acceptance of these new ideologies soon led to the founding of the CCP in Shanghai in 1921. This ideological shift towards more leftist movements such as socialism was in part due to the perceived weakness of capitalist democratic governments, particularly the United States. When the other Western powers were able to dissuade the U.S. from its Fourteen Points at the Versailles Peace Conference, the Chinese saw this as a weakness in republican democracy, leading towards more people to accept far left ideologies as the answer to China’s woes.

While new ideas and ways of thinking were widely accepted across China, with Western literature and thought even gaining ground in Chinese institutions of higher learning, there was much resistance from within the?Nationalist Party and from conservative critics. Chiang Kai-shek, who would come to power within the KMT in 1925 and who was a strong Confucianist and skeptical of Western thought and philosophy, denounced the May 4th Movement for its leftist ideas, seeing its acceptance of ideologies like communism as a genuine threat to Nationalist control. Sun Yat-sen, the father of the Xinhai Revolution, was also critical of the movement, saying it was demoralizing Chinese youth.

The Nationalists’ resistance to the May Fourth Movement culminated with 1934’s New Life Movement, which mainly aimed to debase growing factionalism and weaken the growing influence of the CCP by introducing?new and strict codes for living based upon Confucianism and authoritarianism. Namely, “four virtues” for guidance in daily life were introduced – li [ritual/decorum], yi [righteousness or duty], lian [integrity or honesty], and chi [sense of shame]. The four virtues encouraged good interactions with neighbors, following the rules and laws of the government, and smaller things like not littering, conserving energy, taking part in healthy activities – like athletics – over unhealthy vices and so on.

This attempt to distance the nation from its move towards communism was a complete failure. The strength and clear direction of the May Fourth Movement and, later, the CCP, was completely absent from the abstract moral rules of the New Life Movement. Even Western powers questioned its legitimacy, seeing moral reform as no substitute for political reform. Eventually, the movement was scrapped during the height of the Chinese Civil War. The seeds planted by the New Culture and May Fourth Movement had taken root and out of them had sprouted the flowers of communism, a new direction for China.