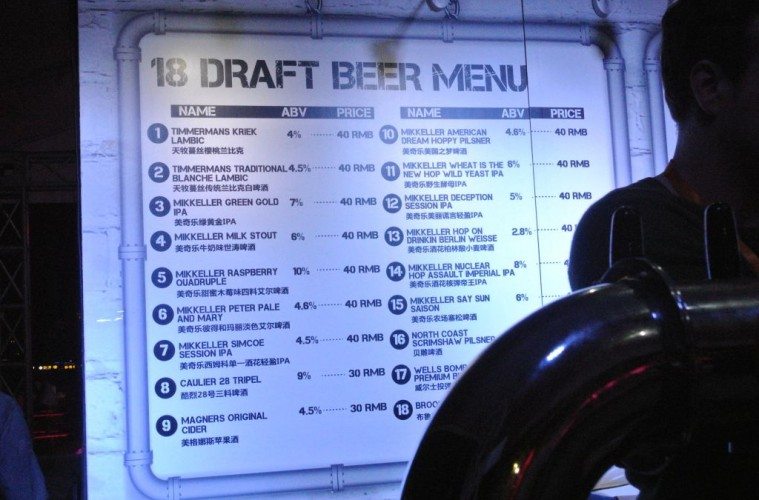 Following our excursion to Shanghai during National Holiday to explore the city’s culinary and beer scene, we were left wanting for more adventures further afield from Ningbo. To go back to Shanghai it’d take a free ticket contest for a gargantuan event to get us to go, and that’s just what happened on the Wednesday before October 17th.

Checking through WeChat, I stumbled across a contest for free tickets to a beer festival in the megacity. Not just any beer festival, but one featuring over 200 beers from around the world. I followed the instructions to enter and sent in my request right away. A day later, we got a response “Congrats, you’re a winner.” After a bout of excitement, we sent the necessary info and dedicated the next few days to planning.

Before we knew it, we were waiting under the glass and concrete shade of the Ningbo Railway Station, where we met our companions and hopped on the train to Shanghai Hongqiao. The country sped past from the windows of the speeding bullet, greenery and paddies and humble houses and villages. This author napped most of the way, dreams of hops dancing through my head. When he opened his eyes we had arrived at our destination.

Due to the size of Shanghai’s expat community, it’s without a doubt that their festivals relating to food and beverage are top notch. We had no idea what was in store for us at the festival, as we found ourselves walking along the quiet lanes near People’s Square and the Huangpu River. Quiet save for the cars and people moving past us, we found our way down an alley and to the unassuming hostel. Dropping our bags, we caught a cab and made our way to party’s location on the Bund. 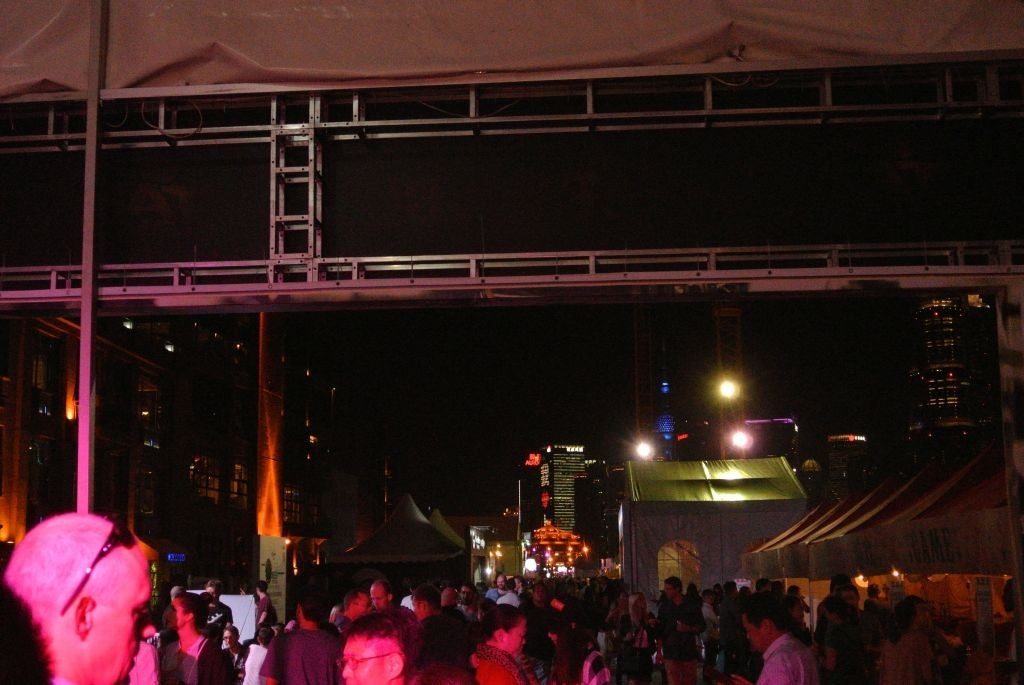 As the taxi whizzed along the crowded Bund, past proud monoliths of architecture furbished into fine restaurants, hotels and bars, a low thumping hum emerged from the distance. Nearing closer, we recognized the song, blaring from a briefly glimpsed enclave of white tents, security officers and fences as we drove by. We quickly told the driver to stop, knowing we had reached our destination. We quickly exited the cab and traveled to the sound, growing more deafening with each step. Around a building and through a maze of fences. No lines, no wait. We got a ticket and were offered our one free brew before entering the mayhem of people, booths, tents and joviality: the 6th Guozhou Shanghai International Beer Festival.

It was quite a spectacle to behold, one long swath of Wharf 1846 had been dedicated to the festival. At one end was the stage, with DJs dressed in playful animal costumes cranking out epic tunes, at the other was a massive Craft Beer booth representing around 50 or so odd bottled and draft beers from places like Brooklyn Brewery, Mikkeller and more. In between were tents upon tents of microbreweries and big-name breweries from all over the world, from Moa in New Zealand to Corona to Shanghai’s own Reberg and Shanghai Brewery.

The last rays of daylight drifted away and the light from the giants of Pudong reflected off the darkened river. The sight was something to take in as we perused and swam through the crowds – consisting of the most expats and foreign exchange students we had ever encountered in mainland China – as we contemplated the most important question of the night: where to begin? As one of our compatriots was from New Zealand, we decided to start at Moa Brewery’s tent to try their lager. Though not particularly unique, it was better than the free beer they offered at the entrance, so we picked up a cup and moved along.

Making our way to the Craft Beer booth, we were amazed at the selection. One menu featured 17 beers from Mikkellers and more, with Magners Cider hiding around the bottom of the list. The other menu was 18 more bottled beers from Brooklyn Brewery and a few more US breweries. The selection of IPAs on tap was endless, and while debating a Milk Stout, I decided to instead try out Mikkellers Deception Session IPA. Besides being nice and bitter nothing stood out about it, but our trip back would bear better fruit.

Of all the booths, the most unique and expansive were those of the German and Belgian breweries. Stopping off at the Alpirsbacher booth, we ran into a bearded guy in monk’s garb giving out samples. Inside the tent was more than a sight. Beers with fresh ham and cheese sandwiches seemed like a winning combination, but with a price tag of 90 RMB (only $15, but still pricy compared to the other offers we found), we passed on it after finding a booth featuring an amalgamation of Belgian breweries and great food – fries, Belgian waffles and the like – including various lambics from Lindemans and the ever-delicious brews of Delirium. We arrived just in time for a contest. The Chimay chalices came out to see who could pour a Belgian ale properly – it should have a head two fingers thick – with the winner taking home the chalice and a t-shirt.

During the heat of the battle, we picked up a cup of Lindemans peach lambic and sipped away as liquid was poured on a crowded stage. While drinking, we ran into two expats from the author’s hometown, Phoenix, Arizona – a record for China. After a bit of laughs and reminiscing about the heat in the Valley of the Sun, we left the booth and made our way back to the Craft Beer tent. It was here we found our favorite brew of the evening: the Mikkeller Wheat is the New Hop Wild Yeast IPA. Very drinkable with a slight bitterness offset by citrus, malt and grassy notes. It was an interesting take on the IPA.

After dancing to the DJ’s tunes a bit it was back through the throngs to search for nourishment in the form of food. Shawarma was up for grabs in the front, plus a cup of This is Lager from the Brewdog tent. By then the engine was running full blast, munching on shawarma while dancing to the tunes was a definite way to wind down the evening. Even though it would go “til Late” our evening ended after the meal, heading to our hostel on the other side of the city to sleep and dream of endless beer. 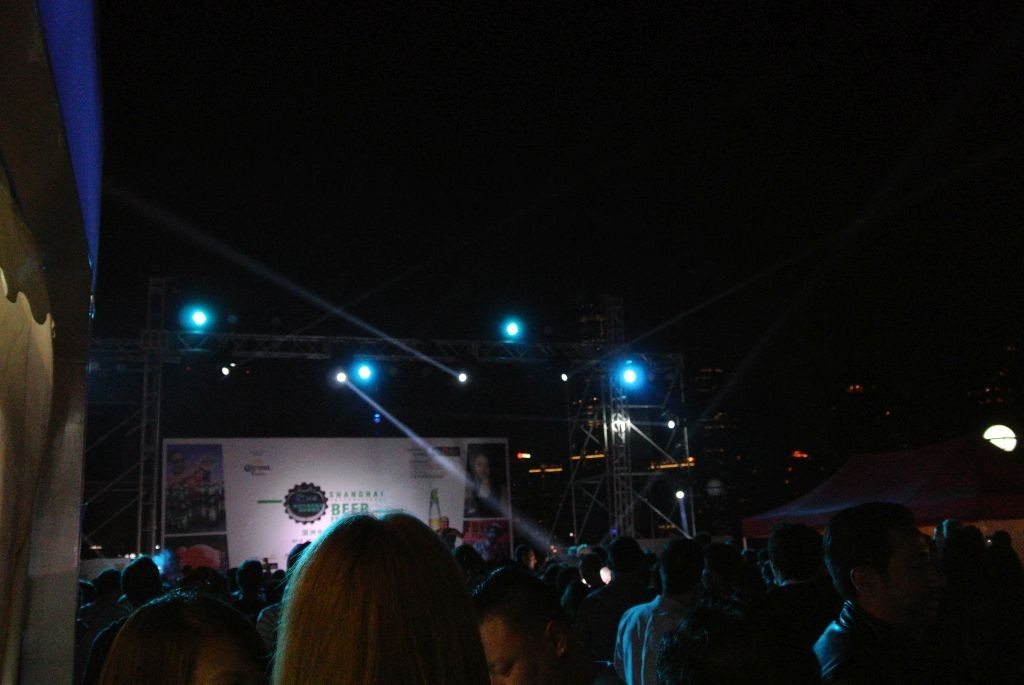